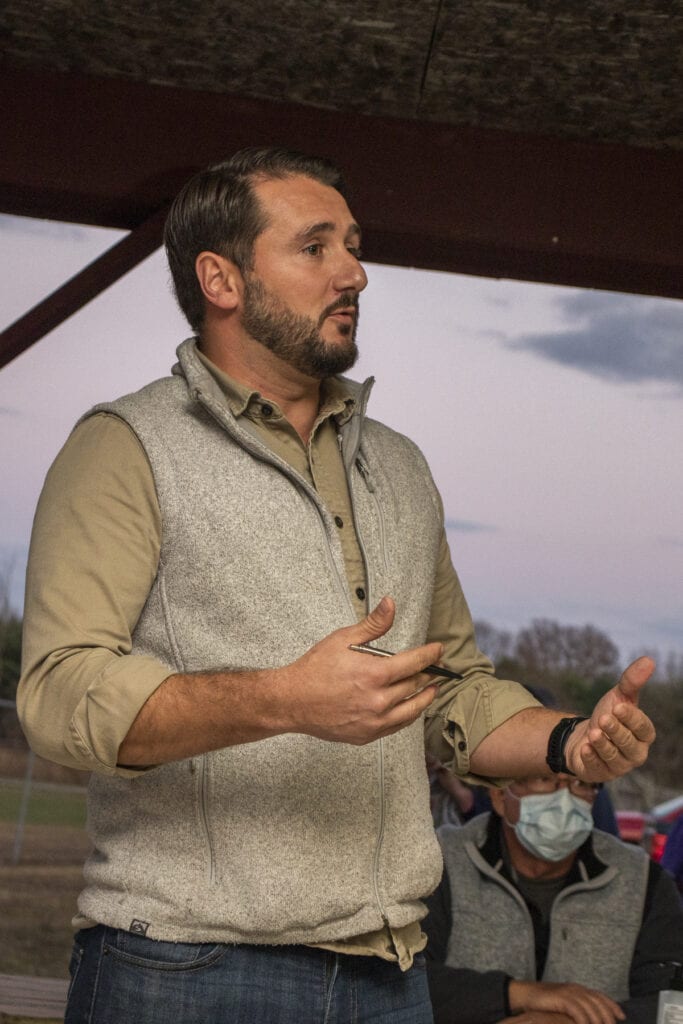 SIDNEY TOWNSHIP — A representative from Apex Wind Energy made his pitch to a very skeptical audience at Monday’s Sidney Township Board meeting.

Apex Development Manager Albert Jongewaard spoke to an audience of about 120 people who were gathered outdoors at Sidney Township Park due to the coronavirus pandemic. He said he’s been made aware of the many concerns of the public and said the goal of the company is to work with the community, not against it, in pursuing the construction of wind turbines.

“I’m here as a guest who is trying to be as open and informative as I can be,” Jongewaard said. “I don’t have to sit here and make up lies and stories. If I start lying to you today, I wouldn’t really have a job because it gets caught pretty quickly. I’m going to be upfront. You might not like what I have to say, but I am going to answer your questions and be upfront about what we are doing.”

Jongewaard said while the company is aiming to install 75 turbines in Montcalm County, those would be dispersed throughout the county’s townships with a goal set to minimize the overall footprint of the operation. He said each turbine is currently proposed to be installed with a minimum setback of 1,250 feet from residences, with a proposed height of around 600 feet for each turbine.

“We’re not working in all of Sidney Township and we’ll also have setbacks from areas like lakes,” he said. “In addressing concerns about visual impacts, we understand people pay money and want to come in and enjoy their vacation home out here, we’re taking that into consideration.”

Jongewaard said his company has no power regarding eminent domain and will only work to install wind turbines on private properties with landowners who agree to sign a lease with the company.

“We can’t force anybody to do anything they don’t want,” he said. “Signing the leases, it’s a one-on-one conversation. We have to answer in good faith and that’s going to force us to go the extra mile and be open to folks. We can’t touch anyone’s property if you don’t have a wind lease.”

Jongewaard then took time to address concerns he believes have been taken out of context. 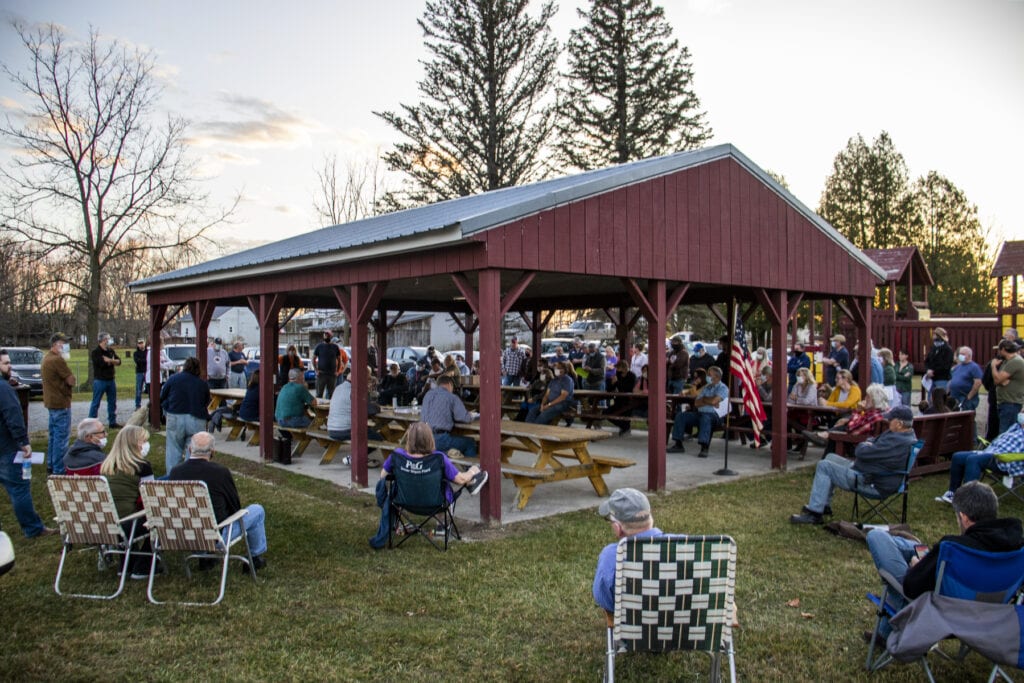 About 120 people attended an outdoor meeting of the Sidney Township Board at Sidney Township Park on Monday evening with the central focus of the meeting being the topic of proposed wind turbines by Apex Clean Energy, which is looking to construct 75 turbines throughout Montcalm County. — DN Photo | Cory Smith

“Some of the stuff I’ve seen, at least on Facebook, or that I’ve been sent or asked about … frankly, it just isn’t very accurate, it’s not true and some of it is misleading or is old information,” he said.

“Apex is here tonight and has preached to us all the positives of wind energy, but please understand this is a sales pitch performed by well-paid salespeople and they are very good at their craft,” Sidney Township resident Andy Welch said. “Please do your own homework and fact-check them. Educate yourselves on the potential negatives that they will not tell you and please be sure to inform your neighbors.”

Regarding health concerns related to wind turbines, a topic brought up by numerous people in the audience, Jongewaard said there are no known adverse health effects to humans or livestock that have been documented “in any credible way.”

According to the World Health Organization’s (WHO) environmental noise guidelines, for average noise exposure of a turbine, it is recommended to reduce noise levels produced by wind turbines to below 45 dB (decibels), as wind turbine noise above that level “is associated with adverse health effects” described as “noise annoyance.”

According to the WHO, noise annoyance is “a feeling of displeasure associated with any agent or condition, known or believed by an individual or group to adversely affect them,” and as a result, “people may feel a variety of negative emotions when exposed to community noise, and may report anger, disappointment, dissatisfaction, withdrawal, helplessness, depression, anxiety, distraction, agitation, or exhaustion.”

Jongewaard acknowledged the possibility of noise annoyance from wind turbines, stating that turbines generate low-frequency noise and “infrasound,” but remained firm on his stance that wind turbines do not lead to any serious health ailments.

“The turbines, the sound is a ‘whooshing’ noise,” he said. “They are not silent machines. Don’t let anyone tell you that they are silent, but they are not loud and they are not negatively impacting your health. The infrasound — like riding in an airplane or driving a car with one window down — it’s irritating, but it’s never made anyone sick. There are documented cases of annoyance … but turbines don’t have examples of causing cancer or heart palpitations or hardening of the arteries. There’s a lot of stuff that’s been alleged, but it hasn’t been proven to be true.”

Several members of the audience alleged that property values and the potential sale of properties may be reduced due to wind turbines.

A study from the Department of Environmental and Natural Resource Economics at the University of Rhode Island reviewed over 48,000 single-family homes within a 5-mile radius of a wind turbine site, as well as over 3,000 in a 1-mile radius. The study found “no statistically significant negative impacts on house prices” from the turbines. It also found that the negative impact on housing prices could, at most, reach 5.2%.

Results in Europe, however, differ.

RWI Essen, an independent economic research institute in Essen, Germany, found that the highest decrease in property value due to wind turbines was for long-settled rural areas where the loss could reach 23% for houses within 0.6 miles of a turbine.

Jongewaard, however, pointed to wind farm projects completed in rural Gratiot County — to the east of and adjacent to Montcalm County — beginning in 2012 as an example of not hurting property values.

Facing accusations that wind turbines kill local wildlife, Jongewaard said the company is working to reduce the risk to animals and working within restrictions set by the state and federal government.

“We’re looking at two-plus years of environmental studies,” he said. “We’re looking at all known eagle and raptor (birds of prey) nests and in the spring we will be looking at bat habitats. We have to share that information with the DNR (Michigan Department of Natural Resources), federal agencies, and they tell us at the end of the day if it’s sufficient.”

Jongewaard said no wind turbine can be within a 1.6-mile radius of any eagle nest.

One of the primary benefits of a wind turbine farm mentioned by Jongewaard is the potential for increased tax revenues for Montcalm County and municipalities within the county.

Per the American Wind Energy Association, in 2019, local communities in the state received $47 million in tax revenues as a result of wind energy produced in Michigan.

According to the official Gratiot County website, since 2012, that county has received $9,140,410 in direct revenues to its general fund through personal property taxes paid as a result of new wind turbines. The county reported much of those funds were used to pay off pension costs and additional salary expenses, while the rest remains in the reserve fund balance — which has increased by $3,489,200 since 2012.

Jongewaard said he sees that a similar situation could develop for Montcalm County.

“That’s just the tax impact,” he said. “There’s also all the signed contracts that individual families have, whether it’s a single acre or a large farmer. That money is paid out annually.”

Regardless, those at Monday’s meeting who oppose wind turbines said the financial benefit isn’t worth it.

“Do you want people in Sidney Township to move away? There goes your tax base,” Sidney Township resident Laura Thompson said. “Do you want your children and grandchildren to stay here and be successful contributors to our community? I hope so. The argument that wind turbines are powering better farms, roads, schools and police will not matter at all if no one is living in the community. More money does not always equal better.”